12th October 2015 – Police beatings, tear gas, hunger and chaos. It sounds more like the repression of the Arab Spring than UN staffed registration centre for refugees. But at Camp Moria on the Greek island of Lesvos, this is the shameful reality.

Lesvos has long been on the front line of Europe’s refugee crisis, with almost 200,000 arriving this year. The vast majority are fleeing government persecution and ISIS forces in Syria, Afghanistan and Iraq. They come to Lesvos from Turkey on what they call ‘the death boats’, the lack of legal channels having created an unregulated market for people smuggling, with drowning common due to overcrowding. The lucky ones are met on the beach by local and international volunteers; the rest by paramilitary coastguards and riot police.

Arriving on the island, I worked with volunteers from the PIKPA camp – the only truly humanitarian camp I’ve seen, run entirely by volunteers and donations – distributing food at Camp Karatepe. One staff member from the UN High Commission for Refugees (UNHCR) told me he had only 13 colleagues on the entire island. Syrian families huddled in scarce spots of shade and squalid conditions. Yet it did nothing to prepare me for what I saw at Camp Moria that night. 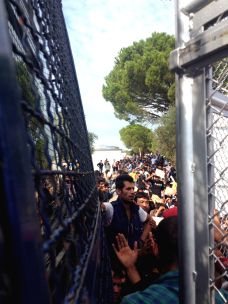 Moria, described to me as a ‘hell hole for non-Syrians’, is Lesvos’ main camp and where all migrants and refugees must register. The police prohibit journalists from visiting without an escort, and speaking to the refugees or photographing the facilities is forbidden. When I arrived, aid workers were outnumbered by riot police. At night there were none at all, leaving a handful of young international volunteers to fill the gulf left by the international agencies. They had no medical staff and only what basic food and pharmaceutical supplies they could scrape together themselves.

Many people sleep exposed to the cold at night, without tents, sleeping bags or warm clothing. Volunteers save their blankets for children and those who arrive soaked in sea water. The ‘toilets’ consist of a few portapotties and concrete rooms floored with swamps of human waste. Between two locked and fenced off ‘reception centres’ bristling with razor wire, a steep slope leads to the registration office where everyone must register to proceed to Athens or anywhere else. When I arrived there were hundreds queuing through blistering heat and cold of night while riot police loomed over the line. Women and children, sick and injured, are all subject to the same degrading conditions.

One volunteer, who complained to UN staff that surplus food at Karatepe should be feeding Moria’s hungry, was told that it was too dangerous and to ‘leave Moria to the police.’ The consequences of this policy have been dire and instructive. These people are traumatised, hungry, thirsty, exhausted. Waves of panic and frustration are commonplace. Refugees and volunteers widely report that the police, lacking any proper training, often respond with violence. Families commonly queue for days and each time the line is disrupted they must begin the ordeal from the beginning.

Two young volunteers from the UK, Annie Risner and Ruby Prins, recalled how tensions escalated in the early hours of Tuesday last week: ‘A diabetic man had collapsed for want of insulin. An Afghan woman recovering from heart surgery collapsed unconscious in the queue. The police wouldn’t help. We called an ambulance, then the violence started. Police were beating men and women alike. When they throw the teargas people really start to panic because there are families in the line. Kids get crushed, joints get dislocated and bones get broken in the stampede.’ The Hellenic police declined to comment. UNHCR writes: ‘Any difficulties that may arise in relation to crowd management due to high numbers of new arrivals [do] not constitute an excuse for the use of violence or any kind’.

Taken by a refugee at Moria

The following day brought something new to this island: the Greek Prime Minister, Alexis Tsipras and Austrian chancellor, Werner Feymann. Their visit lasted a grand total of three hours. Much more time was spent sweeping refugees under the carpet prior to their arrival. According to local media, over 45,000 were removed from Lesvos in the past fortnight. Journalist Sofia Christoforidou reported extra ships being brought in to take refugees off the island and block new boats from coming in.

Volunteers and refugees feared that seeing the full extent of the crisis might prompt Tsipras to shut the border and trap countless numbers in Turkey, where conditions and police brutality are even worse than in Moria. Still, the volunteers I spoke to all wanted to get the truth out, not cover it up. At Moria however, the authorities opted for a more unorthodox approach: they hid the real Moria and built a fake one.

One volunteer sent this statement, on condition of anonymity: ‘The authorities set up a fake camp, did a bit of gardening and brought in a few Syrian families… Volunteers do what they can but the UN has been totally absent, MSF [Medicines Sans Frontiers] working only a few hours, a few tents but most sleeping in the dirt. There has been regular tear gassing and assaults by police. Shame on the Greek government, the UN and the organisations that allowed this to happen.‘

Many others repeated the same bizarre story: buses brought in to obscure the main camp and on the outside, the filth hidden under fresh concrete, and food and chairs put out. Meanwhile, the sick and injured from the previous night went unattended. UNHCR consultant Ron Remond told me this was in the interests of the Prime Minister’s safety. His visit lasted twenty minutes: time for a selfie with newly materialised UN staff and one quick peak behind the bus. Then he was gone and that night Moria descended once more into chaos.

Annie and Ruby reported rioting, refugees forming human shields to protect the vulnerable and threatening a walk out. ‘We were being treated like animals,’ explained 19-year-old Ali from Afghanistan. ‘We’ve had no shelter, no food, no answers, just beatings. We said we would walk out of the camp, a thousand of us, all together.’

But when I visited the camp again on Saturday, it was unrecognisable. A new fast track system had been able to register thousands in 24 hours. UNHCR was bringing in more people, the camp had been cleared of rubbish, bottled water had gone out and kids played together in the Save the Children camp.

By the next day, however, things were going back to normal: fast-track registration was terminated, people queued all day without moving and were told the ID numbers they’d queued for all the previous day were null and void. However, following my report for Al Jazeera, the Hellenic Police issued a statement saying they had ordered an ‘urgent investigation’ into brutality at Moria. All this shows what can happen when the world is watching. But Old Moria is what happens the moment we turn away.

Following his visit to the capital of Lesvos, Mytilini, Tsipras called again on Europe to help resolve the humanitarian disaster Greece has neither the financial resources nor the moral obligation to face alone. But his calls for ‘greater collaboration with Turkey’ caused alarm. They foreshadowed this week’s negotiations between Turkey and the EU, which proposes to pay President Edrogan $1billion to expand the Turkish camps and shut the Greek-Turkish border in collaboration with Europe’s corporate border guard, Frontex. 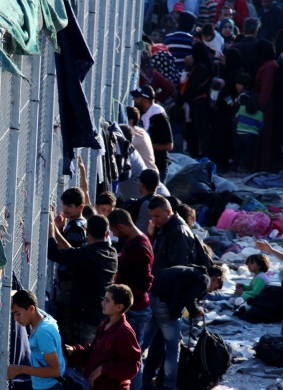 The inconvenient truth for EU leaders is that refugees say they are not safe in Turkey. Sana, a 29 year old Kurdish teacher, told me the Turkish camps ‘were very bad. They beat us and insult us, they say if we did not deserve exile then we would not be here. They won’t even give milk to the babies. They hate us.’ Others report being robbed, tortured, and even witnessing Turkish soldiers aiding ISIS. Many also fear that Edrogan might quietly push thousands back into Syria and Iraq, trapped with ISIS behind them and the steel walls of Europe in front.

The EU has long been allocating billions for border control, with precious little left to fund lifesaving humanitarian work in disaster zones like Lesvos. As security tightens, refugees move on to find another way, leaving aid agencies scrambling to keep up. I asked one Kurdish father if harsher security measures would dissuade him. ’41 members of my family are dead. My daughters, 10 and 12, were kidnapped and killed themselves rather than be sold as slaves,’ he said with tears in his eyes. ‘I have to get my wife and son out, do you understand? What do I have to fear from fences?’

For now, refugees are still arriving in Lesvos in their thousands. On Thursday night 56 people were saved from drowning and one toddler lost his life. The very next night the lack of safe, legal channels for the crossing cost another life: a baby hidden in a bag and mistaken for baggage, tossed overboard to stop another ‘death boat’ sinking.

UNHCR’s Ron Redmond highlights the need to legalise passage and calls for EU funds earmarked for humanitarian work. But he also said that European states have every right to control their own borders and in truth, there is a growing contradiction there. With the spread of such incredible violence throughout the region, the EU will have to make a choice: to open the gate, or let countless numbers of people die on the other side.